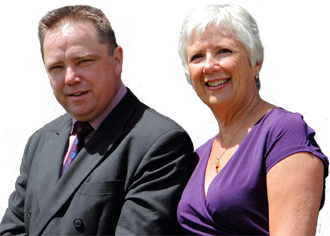 We became marriage celebrants in September 2005.

Since becoming marriage celebrants, we have performed hundreds of wedding ceremonies.

Like everything in life, ceremonies and the way we service our customers is constantly changing.

Listening to our customers is what we feel is one of the key things that make us great Celebrants.

We first registered as a marriage celebrant by the Attorney-General in September 2005, after successfully completing training as a Marriage Celebrant.      When the Certificate IV in Celebrancy was introduced into the VET system we thought it was a great idea to do our training again.    In December 2010 we achieved the Certificate IV in Celebrancy.

Since becoming marriage celebrants, we have performed hundreds of wedding ceremonies, and we continue to keep up to date with new ideas, wedding styles and trends, and training (Ongoing Professional Development).

We do this so that we can continue to be among the best marriage celebrants in Perth, Western Australia.

Patricia originates from the UK, and has lived in Australia for over 53 years since arriving with her husband and three children.   In 2022 Patricia celebrates 59 years of marriage to her husband Dennis.    Patricia has warm and friendly personality and has strong family and community values.    Patricia has enjoyed a variety of life experiences which she attributes to her warm and friendly personality.

Patricia has strong family and community values, including her commitment to supporting the recent changes to the Marriage Act.    Since retiring in Mandurah, Patricia enjoys a busy life as a marriage and funeral celebrant, and enjoys spending her free time with her husband Dennis by volunteering their time supporting a number of community and service organisations.

Patricia, what is the most memorable ceremony that you have performed?

Wow what a question, how can I answer such a question when every wedding is so very special and important to me.

There is one ceremony that I shall always remember……

A New Zealand Maori couple had planned and booked their wedding.       The venue was in a rustic brewery come pizza restaurant in Beechboro, and the hosts of the establishment were absolutely superb.      Unfortunately, because the my couple did not allow sufficient time, their divorce papers did not arrive from New Zealand in time for there ceremony, so they could not be legally married.

At the conclusion of the commitment ceremony, the elders of the family performed a tradition Maori ceremony.      It was the first time that I had witnessed such a ceremony which commenced with the sound of chanting as Maori women dressed in native Maori customs, walked to where I had been standing to present the commitment ceremony, and proceeded to circle my couple.

As they circled my couple, the Maori women's chanting raised and lowered in volume as they invited the ancestors to join them and bless the couple.    The ceremony was very surreal and somewhat hypnotic as I felt the hairs on the back of my neck rise.    I felt as if I would see the ghostly images of their ancestors joining the ceremony to bless my couple.    The Maori Men with painted faces and banging their ceremonial spears, joined the ceremony chanting.

The whole ceremony, with such a traditional, spiritual and cultural heritage calling upon their ancestors, was the most amazing ceremony that I have ever experienced.    There was such a spiritual change in the air, and you could not help but to feel an overwhelming feeling of peace, joy and love.

I can only imagine that my couple would have felt very loved and blessed from all their ancestors (past and present).

At a later date (when there paperwork arrived) I performed the legal ceremony for my couple.

Mark's family origins is also the UK, and has lived in Western Australia for over 52 years.   Mark h 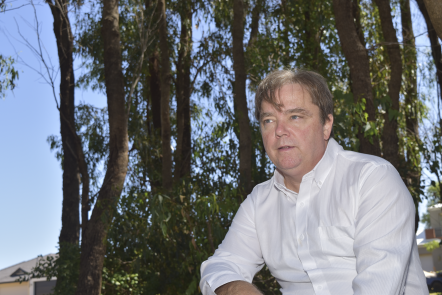 as been married to Sarah (Patricia's & Dennis' daughter) and in 2022 they will celebrate over 29 years of marriage, during which time they have worked together to raise their two children who are now young adults.

Mark has an approachable, friendly and calm manner about himself.    Mark has strong family and community values, and for the past 35 years has volunteered much of his time to supporting community and service organisations (including 13 years as a Rotarian in Rotary).

Mark, what is the most memorable ceremony that you have performed?

I have many stories of ceremonies that have been special to me over the years, one in particular was when I married a couple at Harold Boas Gardens in Perth.    My bride was struggling with the fact that her father had passed away many years before, and there was nobody that she wanted to walk her down the isle.

What made the ceremony truely amazing, was there was a slight breeze about, and when my bride released the butterfly it flew around her a bit, and instead of being swept away with the breeze.   The butterfly landed on a shrub with a perfect view of the ceremony.

The butterfly remained for the whole ceremony, and was there until the completion of the ceremony where I presented my bride and groom to their family and friends.    It was as if butterfly was the spirit of her father.

At the end when I was mingling amongst the crowd, I had an 80-year old lady approach me.   She thanked me, and said that it was the best wedding that she had ever attended.

Acknowledgement of Country. In the spirit of reconciliation MyCelebrant acknowledges the Traditional Custodians of country throughout Australia and their connections to land, sea and community. We pay our respect to their Elders past and present and extend that respect to all Aboriginal and Torres Strait Islander peoples today.

Acknowledgement of Country. In the spirit of reconciliation MyCelebrant acknowledges the Traditional Custodians of country throughout Australia and their connections to land, sea and community. We pay our respect to their Elders past and present and extend that respect to all Aboriginal and Torres Strait Islander peoples today.